This was the very first clean on the Toyota solar farm since they were installed, so the solar panels were particularly dirty. Clean Solar Solutions Ltd, established by the same team behind All Around Property Cleaning Ltd, have been asked by British Gas Solar to clean the solar panels on an ongoing basis.

What benefit has our solar panel cleaning service brought to Bluefield LLP, Toyota and British Gas Solar? A recent study by researchers in the Netherlands shows that solar panels lose up to 7.4% of electricity generation in the first 12 months after installation from pollution alone. We would expect the Toyota plant to have lost at least 10% of its output in the 23 months since its install, judging by the picture below.

If the solar panels at Toyota were losing just 10% of their output, the array was very likely to be losing at least 1,260kWh of electricity everyday. This will have been hurting Toyota and British Gas Solar by knocking a large hole in their profit margin. By cleaning the solar panels, we have got them running back up to between 95%-100% efficiency. A 10% drop in power output means it would take Toyota and British Gas Solar a whole extra year to recoup their initial outlay!

There are many UK records and firsts being accomplished on this groundbreaking project by Toyota, British Gas Solar, Bluefield LLP and ourselves.

The solar farm in Derby is the first to be installed by any UK car manufacturer and is the largest installed on the site of an industrial user. Toyota are making this and their solar farm site at Deeside an official ‘Eco-plant’. Toyota have four others strung across the globe. Dave Chapman, Head of Facilities and Environment at Toyota says “Our aim is to produce Eco-cars in an Eco-plant with Eco-minded employees.”

British Gas Solar funded the £12.4m project, which covers about 90,000 sq.m. That’s the equivalent to 4 & 1/2 football pitches! Despite its size, the solar farm is not a blight on the Derby countryside. In fact, the solar panels are so situated that they can only be seen when you fly out from East Midlands airport!

Both Toyota and British Gas Solar benefit from the array financially. Toyota use the free electricity generated by the solar panels, saving them hundreds of thousands of pounds annually and British Gas Solar generate income from the Government-backed Feed-in Tariff. The initial outlay for the solar panel farm is expected to be recouped in approximately 10 years. From its install in July 2011 to June 2013, this Derby solar farm has produced a whopping 5MW of electricity!

The Bluefield-owned solar farm at the Toyota plant in Derby will continue to produce the maximum amount of electricity possible thanks to the ongoing maintenance from British Gas Solar and solar panel cleaning carried out by Clean Solar Solutions Ltd. 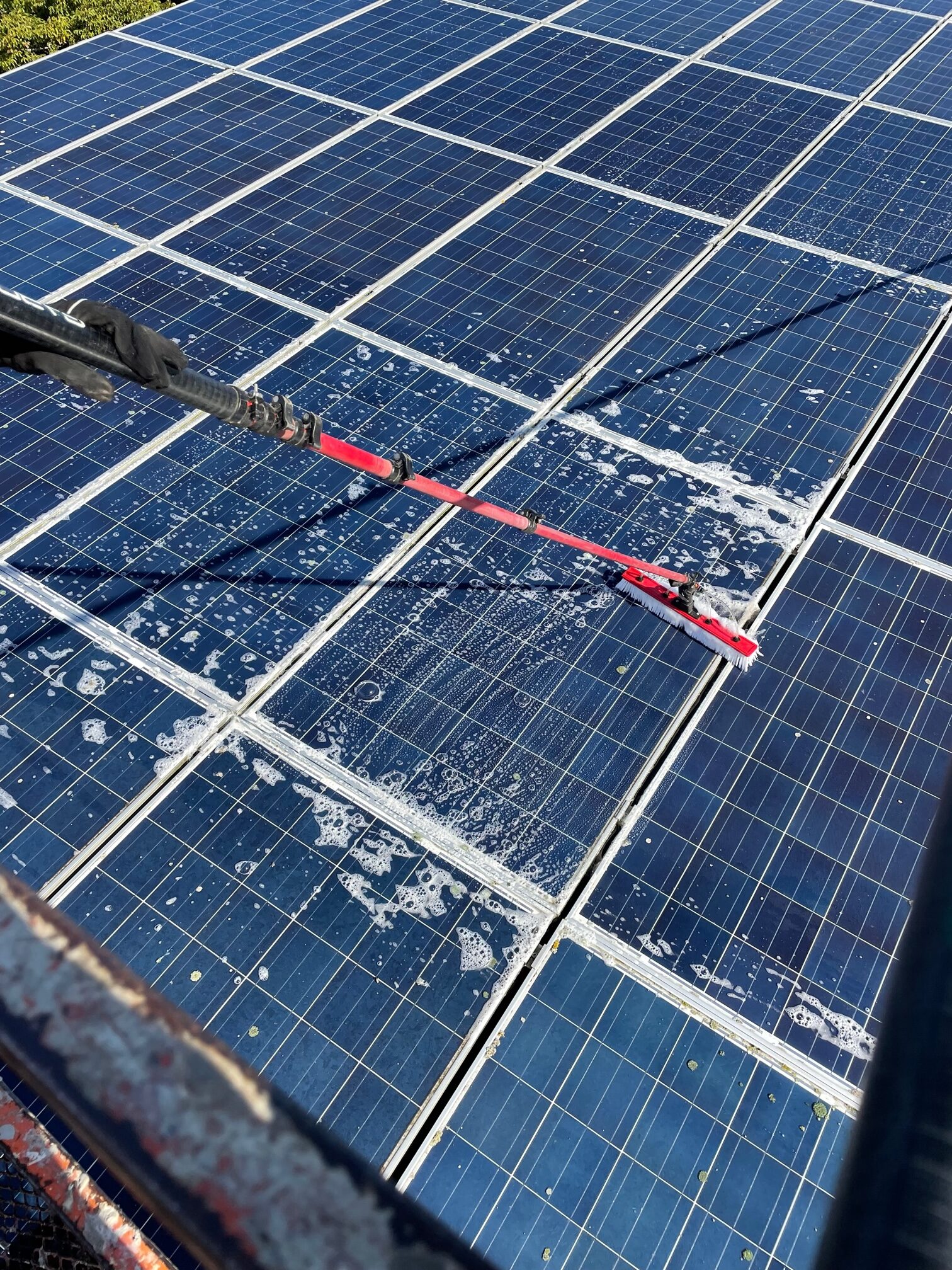 Then the panels are scrubbed, removing the lichen and then finally, washed down and rinsed.  All work carried out by Clean Solar Solutions is in conjunction with the SEUK Best Practice Guidelines 2021. 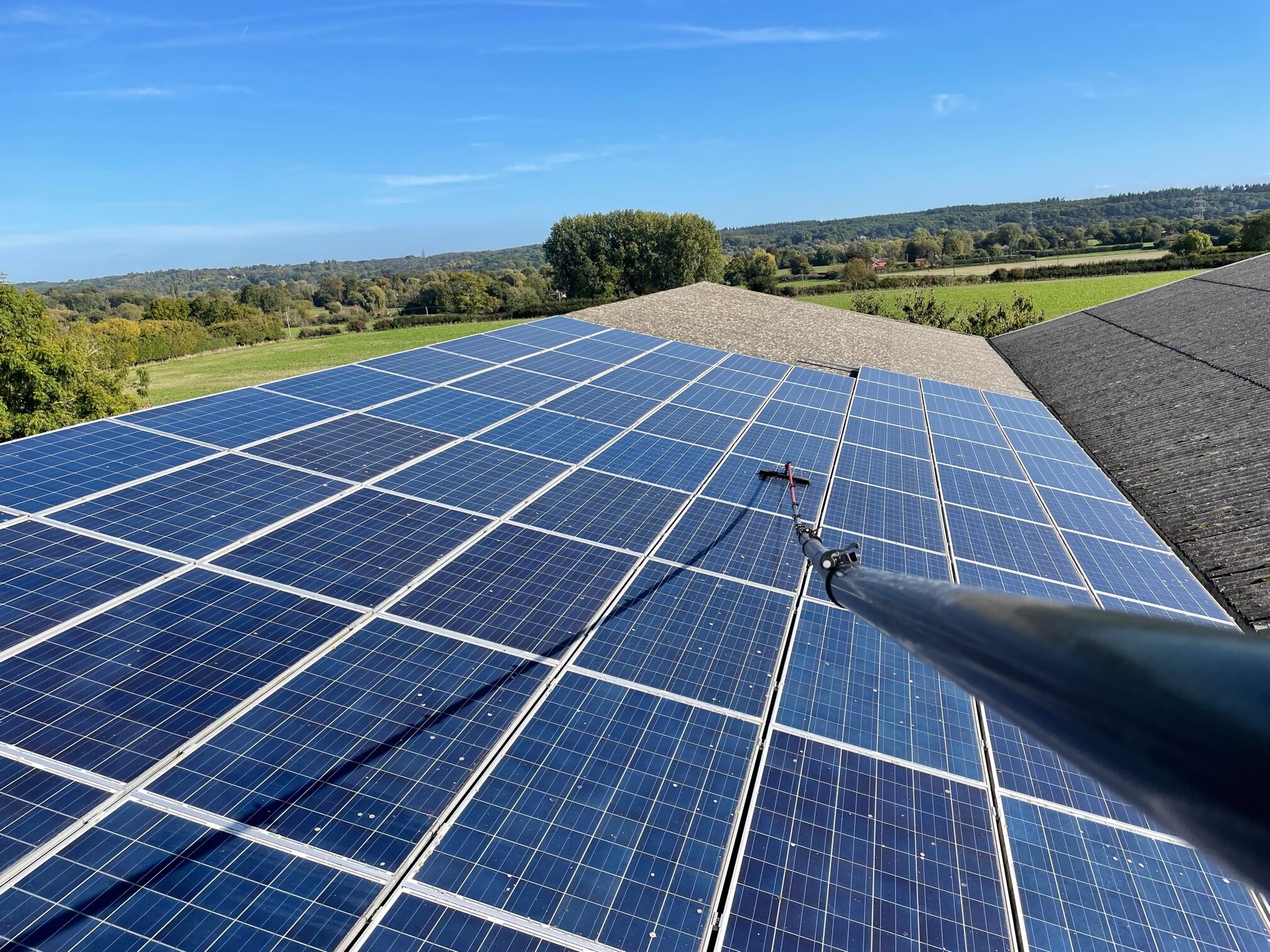 If you are a solar array owner in Fordingbridge or the surrounding area, please contact us.  We carry out agricultural, commercial and residential solar panel cleaning and maintenance in the Fordingbridge areas and will be pleased to assist you.